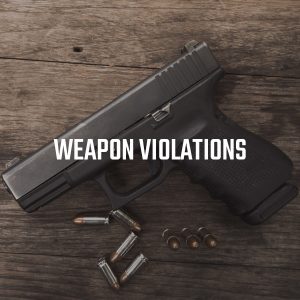 Federal firearms violations are investigated by the Bureau of Alcohol, Tobacco, Firearms, and Explosives (ATF).  However, federal cases can also arise from an “adoption” of a state or local law enforcement gun charge.  That means you could be arrested on state charges and the ATF then picks up the case for federal prosecution.

Federal firearms statutes apply to people involved with the sale, possession, purchase, or use of guns, including manufacturers, dealers, and owners.  Federal law requires everyone in the business of dealing, manufacturing, or importing firearms or ammunition to be properly licensed.  Additionally, it is a crime to make a false statement with respect to any records required for the licensing and purchase of firearms.

The two most commonly charged firearms offenses are (1) unlawful possession of firearms by convicted felons and (2) firearms used in the commission of a violent crime or drug offense.

Unlawful Possession of a Firearm or Ammunition

Federal firearms offenses arising out of the use or carrying of a firearm during a violent crime or drug trafficking offense can carry severe penalties.  In addition to the penalty received upon a conviction of the underlying offense, a defendant faces a consecutive mandatory minimum prison sentence starting at five years.  That consecutive penalty can increase with the severity of the circumstances.  For example, if the firearm is brandished or displayed during a violent crime or drug trafficking offense, the consecutive mandatory minimum becomes 7 years and, if the gun is fired, it becomes an additional 10 years.  For repeat offenders who have committed crimes involving machine guns or silencers, the sentence can increase to up to a life sentence.

To convict a defendant on this type of charge, the government must prove that the use or possession of the firearm was related to a drug trafficking offense or a crime of violence.  It is not even necessary that a defendant carry the firearm during the crime.

Developing a strategy to defend against a federal charge of unlawful firearm possession involves a careful consideration of the surrounding facts.  It requires skilled counsel to determine which elements of the prosecution’s case are the most vulnerable.

At Haas Law, you can expect to hire a criminal defense lawyer with extensive experience representing people in federal court can provide aggressive counsel regarding your case.  Contact us online or call us at 407-755-7675 to make an appointment to discuss your case with an experienced defense attorney.